The Best Models of Expected Treasury Returns: A Lesson in Forecast Failure

For those paying attention, models of expected Treasury returns have failed epically. A spectacular and remarkable disaster. The only way to salvage these models is to use indicator saturation to adjust for and correct the mean shifts.
What are the models I deem the best?
Although I will not be performing a literature review there are a few models that have really stood out in the past twenty years. Sabol (2016) gives a thorough overview of this literature and compares many models head to head in an out-of-sample forecasting exercise. The models presented here are based on that paper which relies heavily on Cieslak and Povala (2010); Rebonato's interpretation; and the classic Cochrane and Piazzesi return factor (2002).
Why have the models failed?
At the fundamental heart of an expected return model is mean reversion. What this requires is a slow-moving variable whether a moving average of rates or outside the rates market itself that one can use to detrend to the level of interest rates.
So I guess I could or should reiterate why have these models failed? Well, the most basic place to look is at the de-trending variables. I don’t know if anyone else is even paying attention, but I’m paying attention, I’m always paying attention. Why expected returns models have failed all comes down to the fundamental de-trenders used. But the special caveat today is that no matter which trend one uses they all have failed.
It is common knowledge that all expected return models rely on a trending variable.  All tend to be fairly similar, but historically trend nominal GDP per capita seems to be most in line with the level of interest rates.  Trend nominal GDP per capita includes with it real GDP per capita plus inflation therefore capturing a fundamental driver of both break-even inflation and real interest rates. 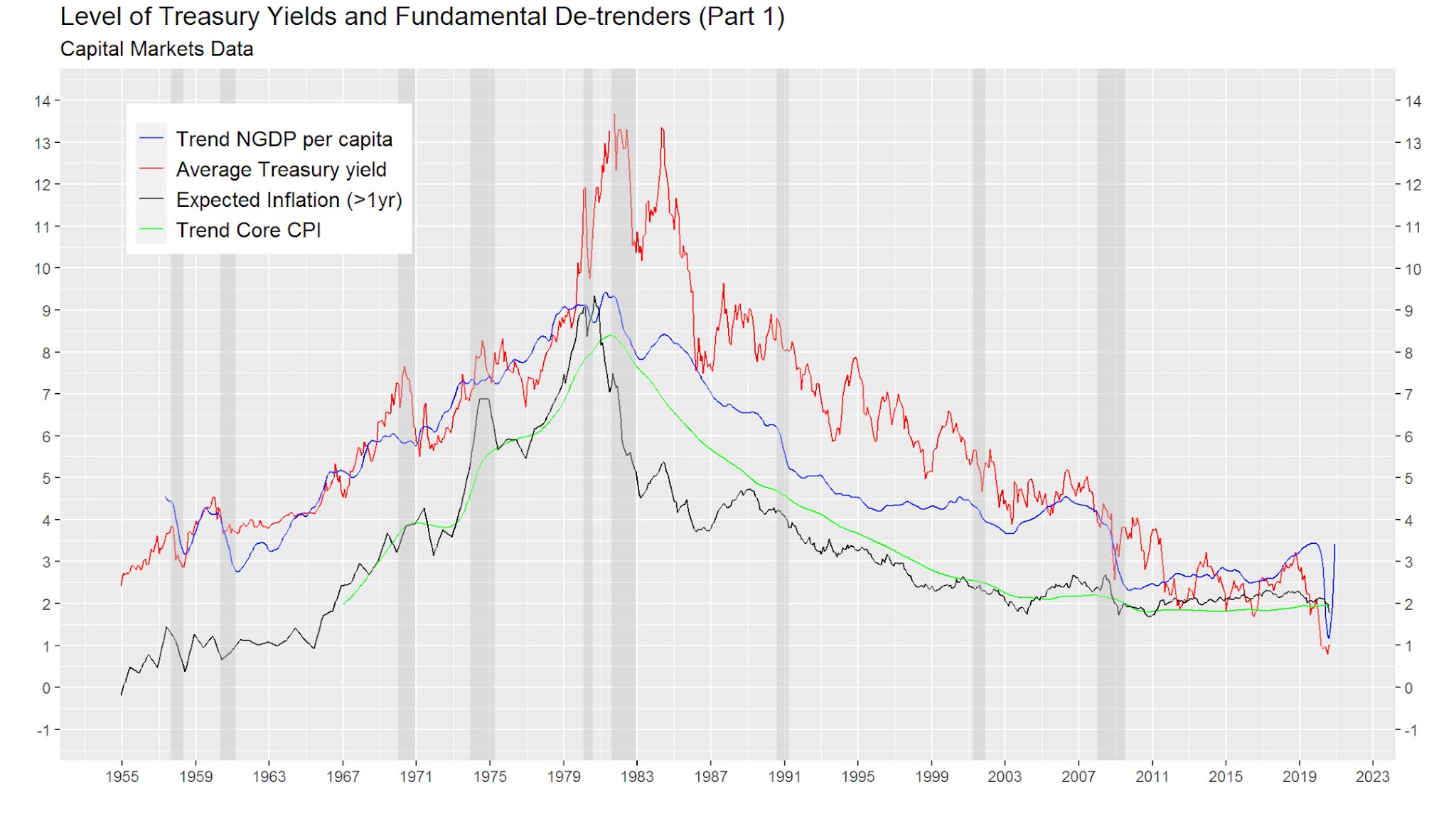 If we zoom in a little bit we will be able to see the crux of the problem.  Expected returns were in fact already negative going into the beginning of 2020.  Sprinkling in a little COVID-19, and yields declined much more and faster than nominal GDP per capital could possibly.  The call was made at the end of last year that expected returns would be horrible and those prospective future returns have only gotten to be more horrible, but as yields continued to decline the prior forecasts Just looked worse and worse. A model which seemed to tracked actual returns since the early 1960s has found itself imploding miserably. 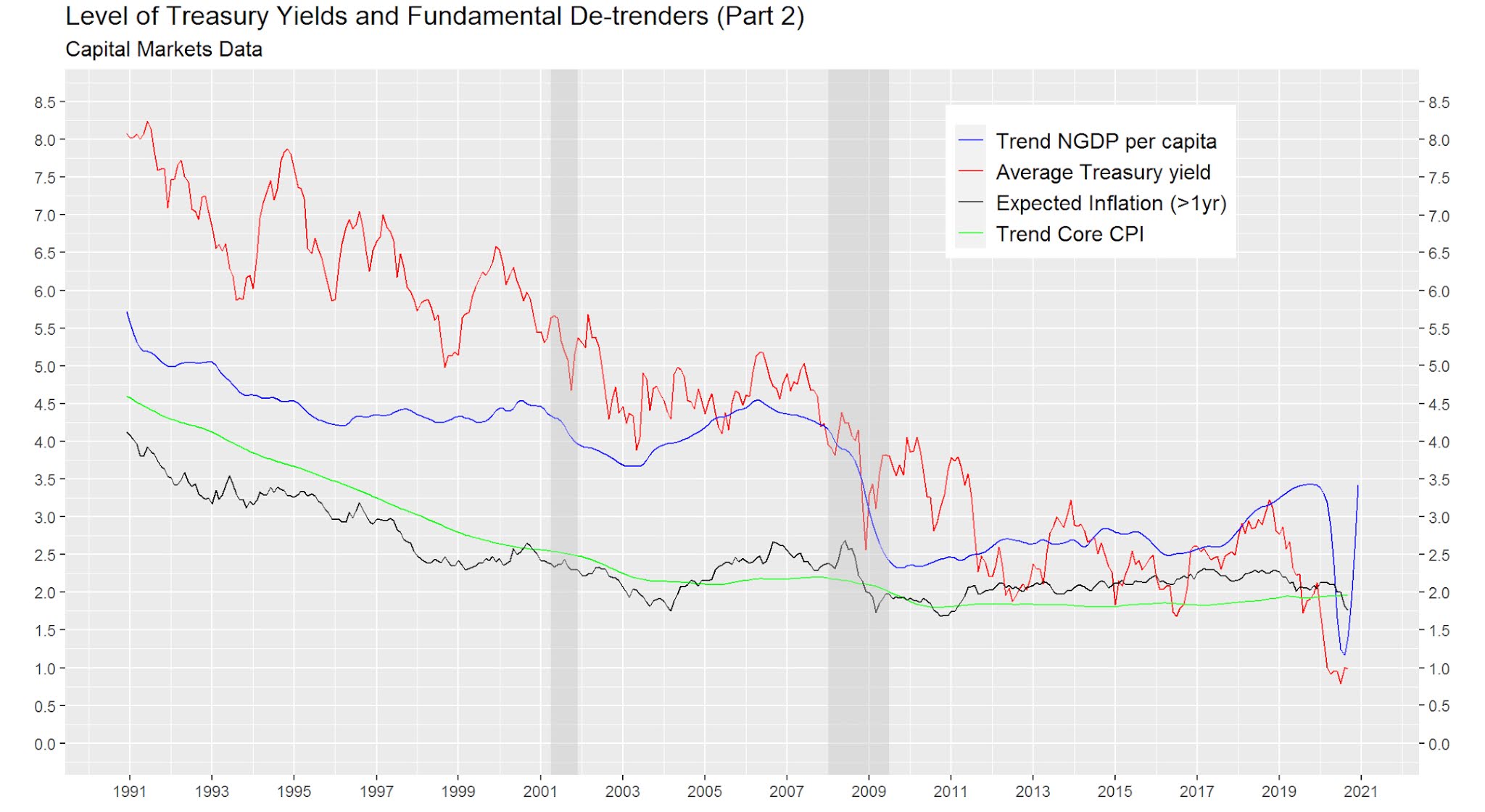 What happens when your economic variables cant match the volatility of the forward-looking movement in rates? Spectacular failure, that's what corona-times have brought us.  The following two plots show the rather successful history of expected return models and their recent failures. 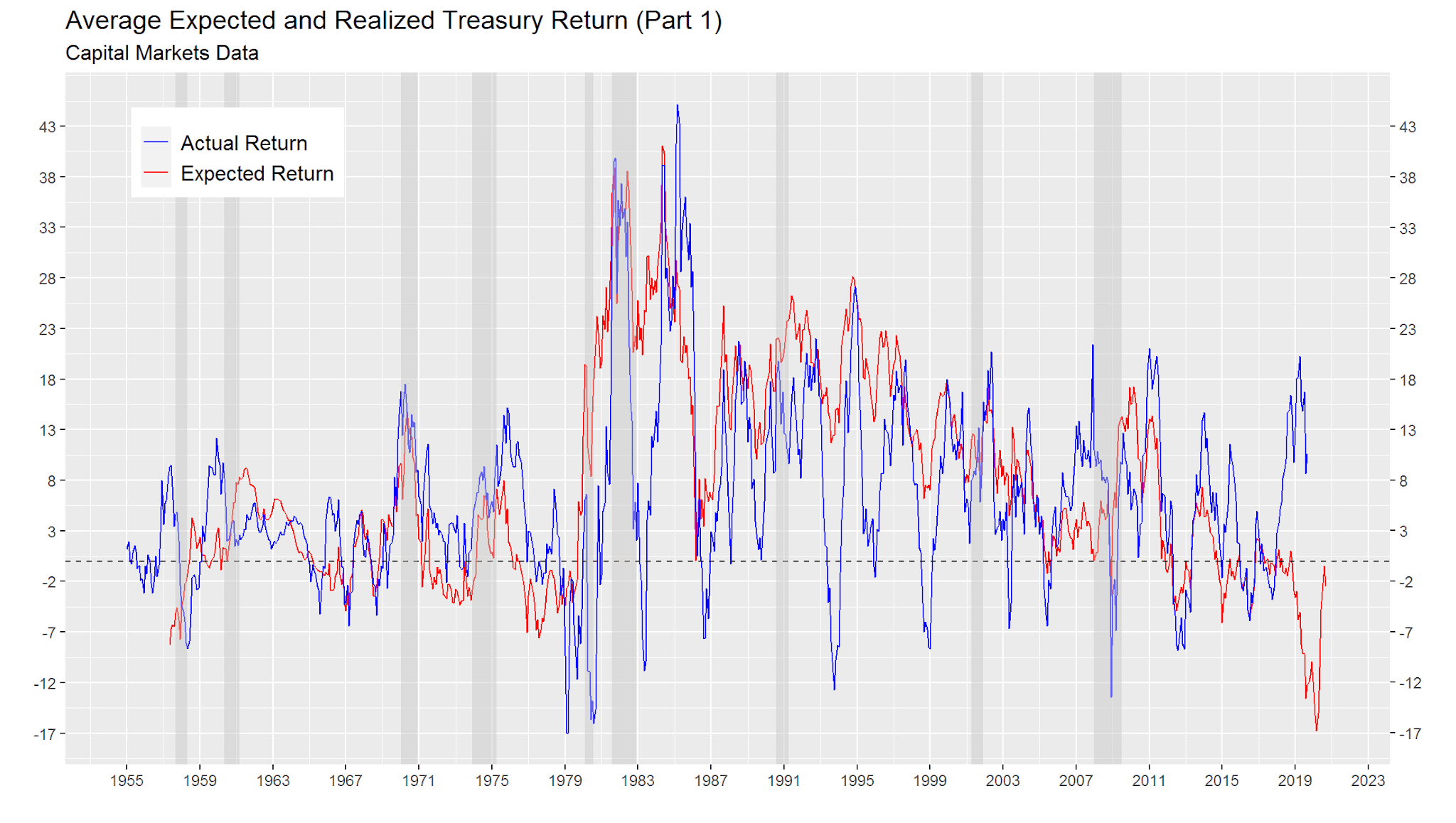 Recent forecasts have been almost perfectly negatively correlated with actual outcomes: Just throw a negative in front of the forecast and you would have been in the ballpark. 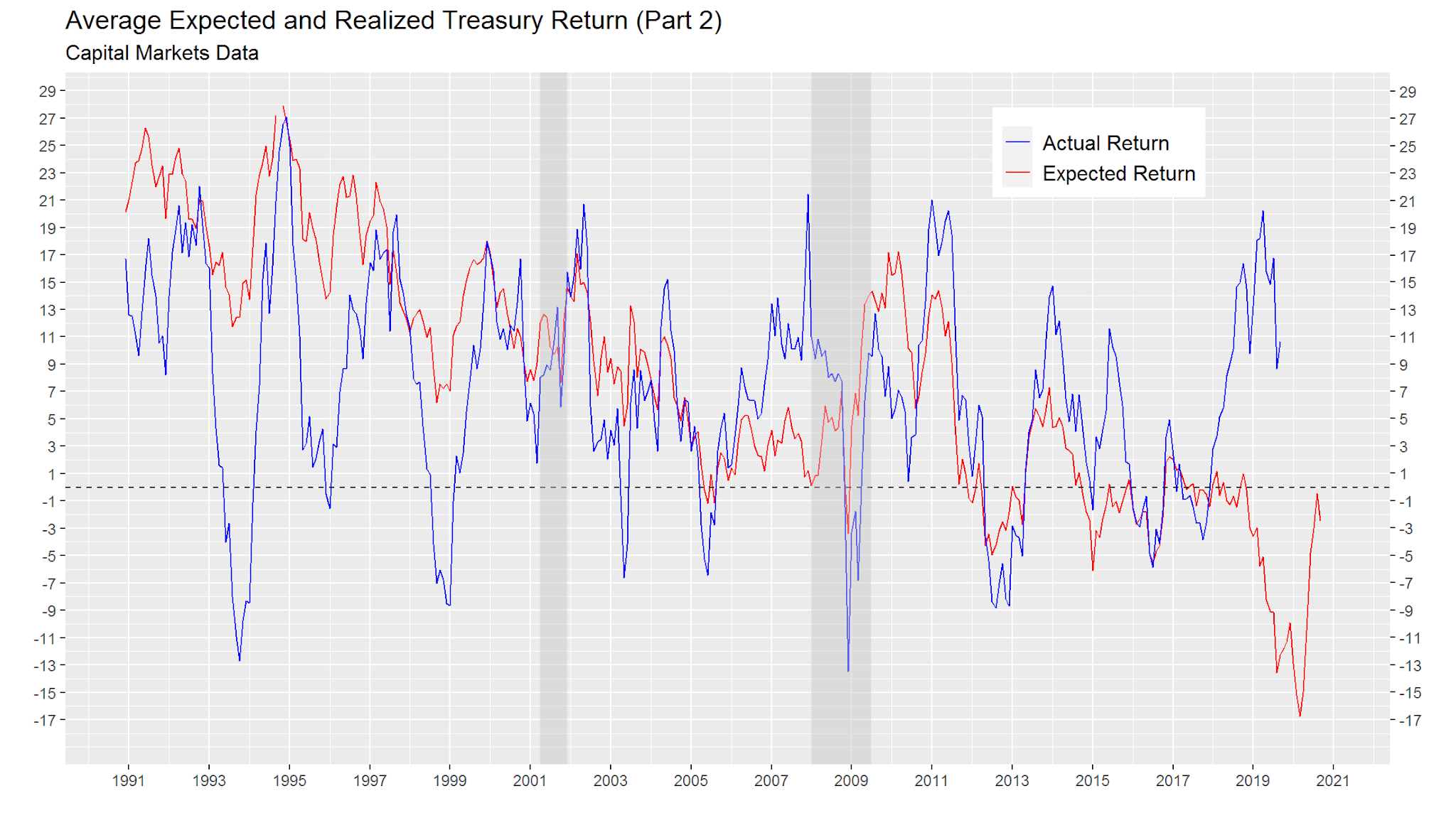 Source of forecast error
A closer look reveals that the major source of forecasting error was that of the real risk premium. Trend real GDP per capita simply could not keep pace with the decline in real rates. 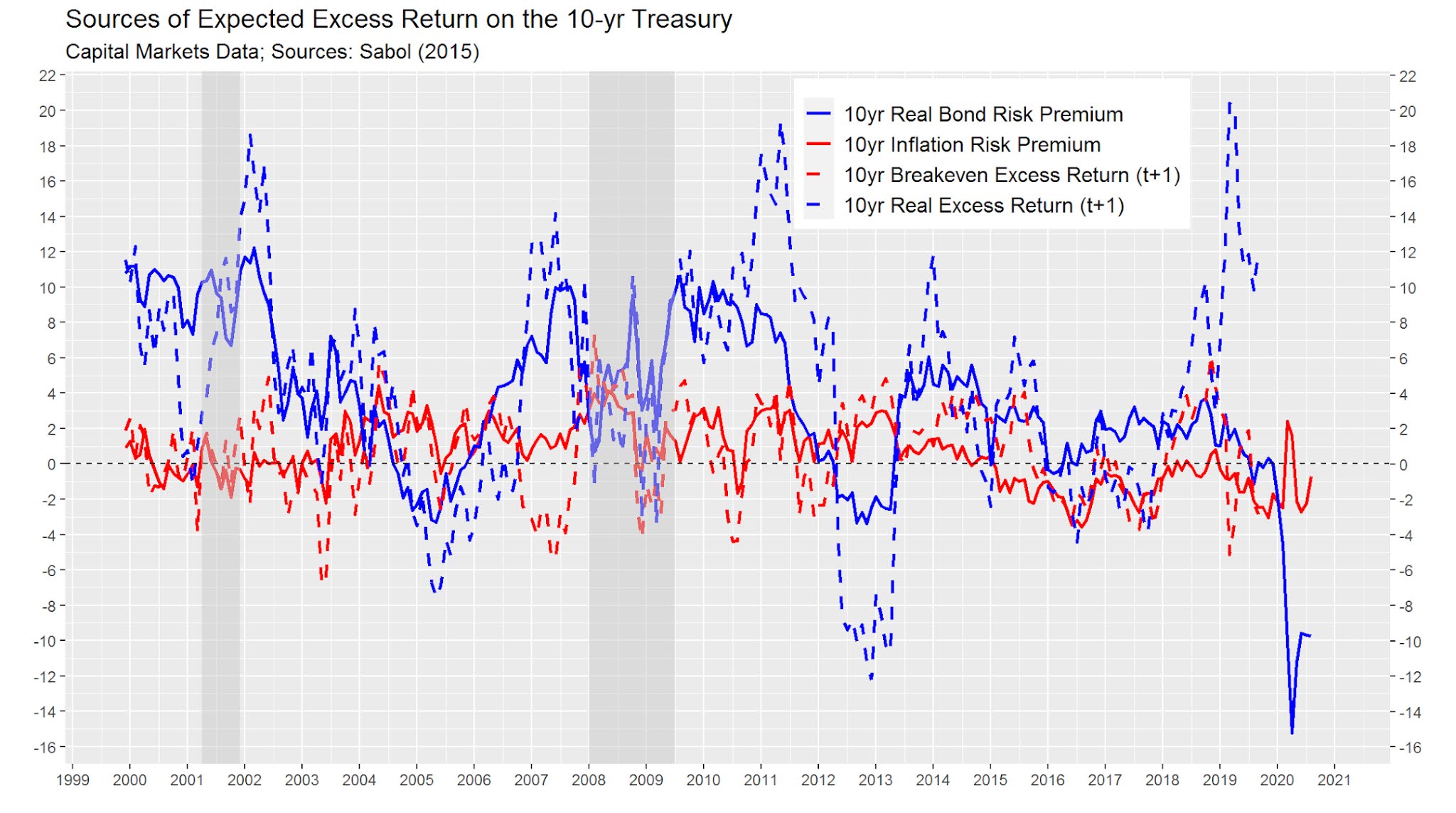 In contrast, the expected inflation risk premium held up nicely. 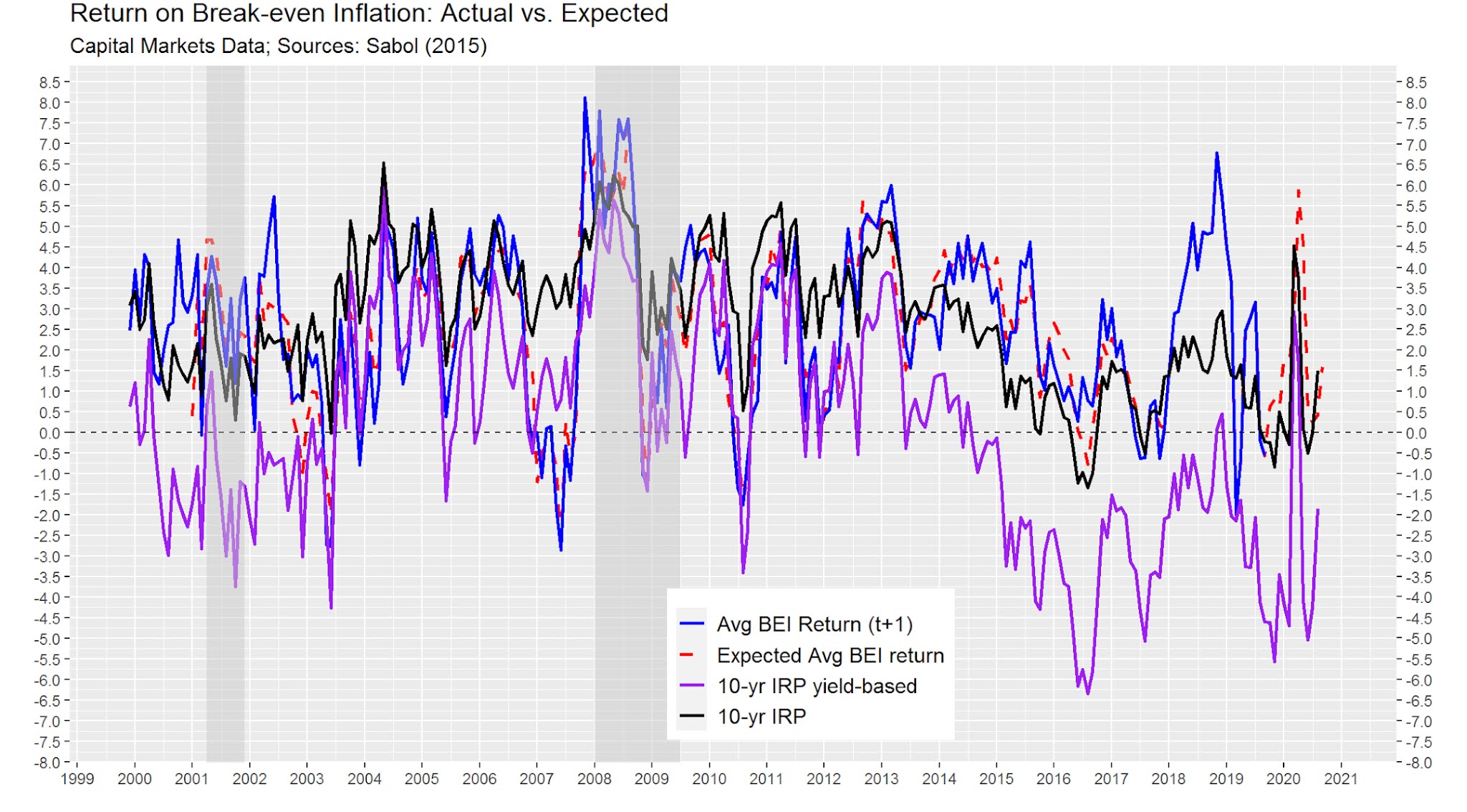 Accounting for pernicious mean shifts
The formal taxonomy of forecast failure was developed by David Hendry: 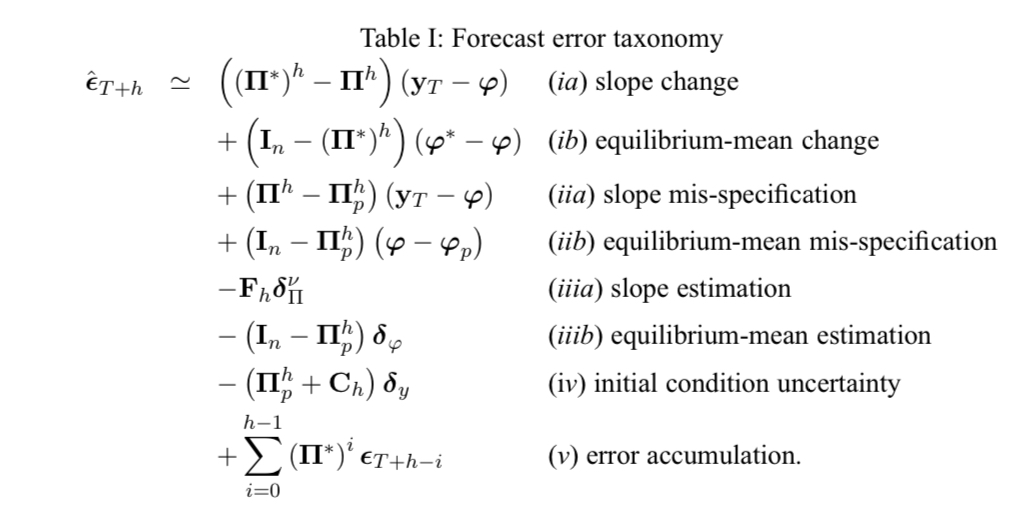 Of these possible sources of error, the mean shift is the largest and most common source.  All we can do is identify the shift and account for it in future forecasts. Hendry and others have proposed bombarding a model with dummy variables to account for outliers and correct for these mean shifts. This process is formally known as impulse indicator saturation.  There are others too, such as Step indicator saturation and trend indicator saturation.  This is part of an econometric framework called general to specific modeling, which I believe is the most promising of all frameworks in econometrics.
Models with indicator saturation have held up much greater, yet still call for historically massive negative treasury returns. These models were still probably wrong in real-time but aesthetically look better when plotted against prior returns. Take the two forecasts below: the black line is that of a model which includes impulse indicators and the green line is a forecast solely reliant on trend nominal GDP per capita. Perhaps also a model which incorporated shocks to expectations could have foreseen or at least somewhat tracked the decline in real interest rates. 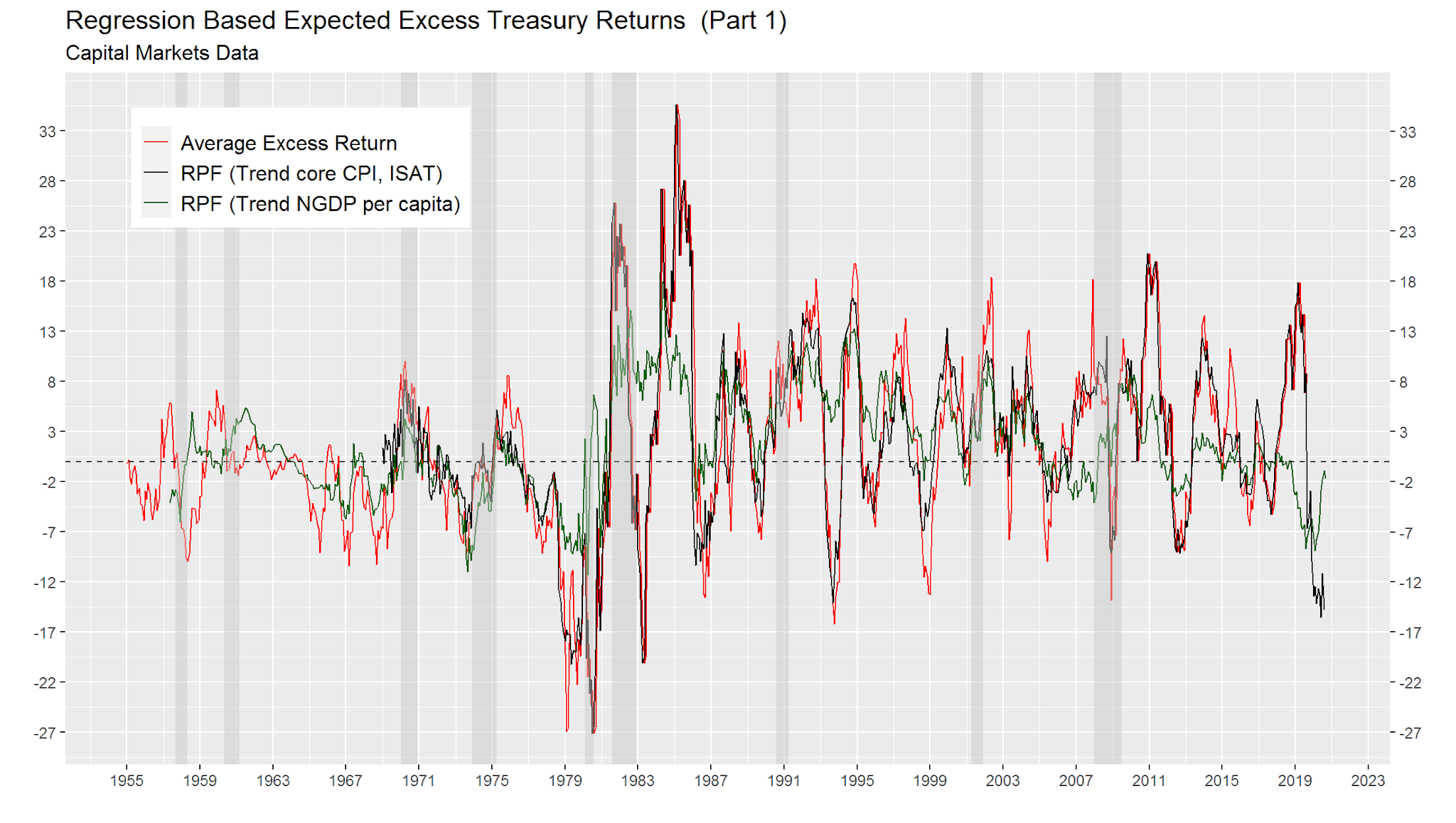 Going forward what’s the forecast?
Going forward we must realize that there are in fact many factors that will decide the fate of future expected returns.  We already know what the models that have recently failed us have to say: expect lower real returns. Now we must go beyond and look at some other potential factors.
A model that includes sharp divergences in short-term expectations from expectations of longer-term GDP growth might be able to better capture the sharp potential swings in risk premium.  After all, this is what empirically captures movements in the ISM and we all know how useful that is in tracking asset risk premiums. 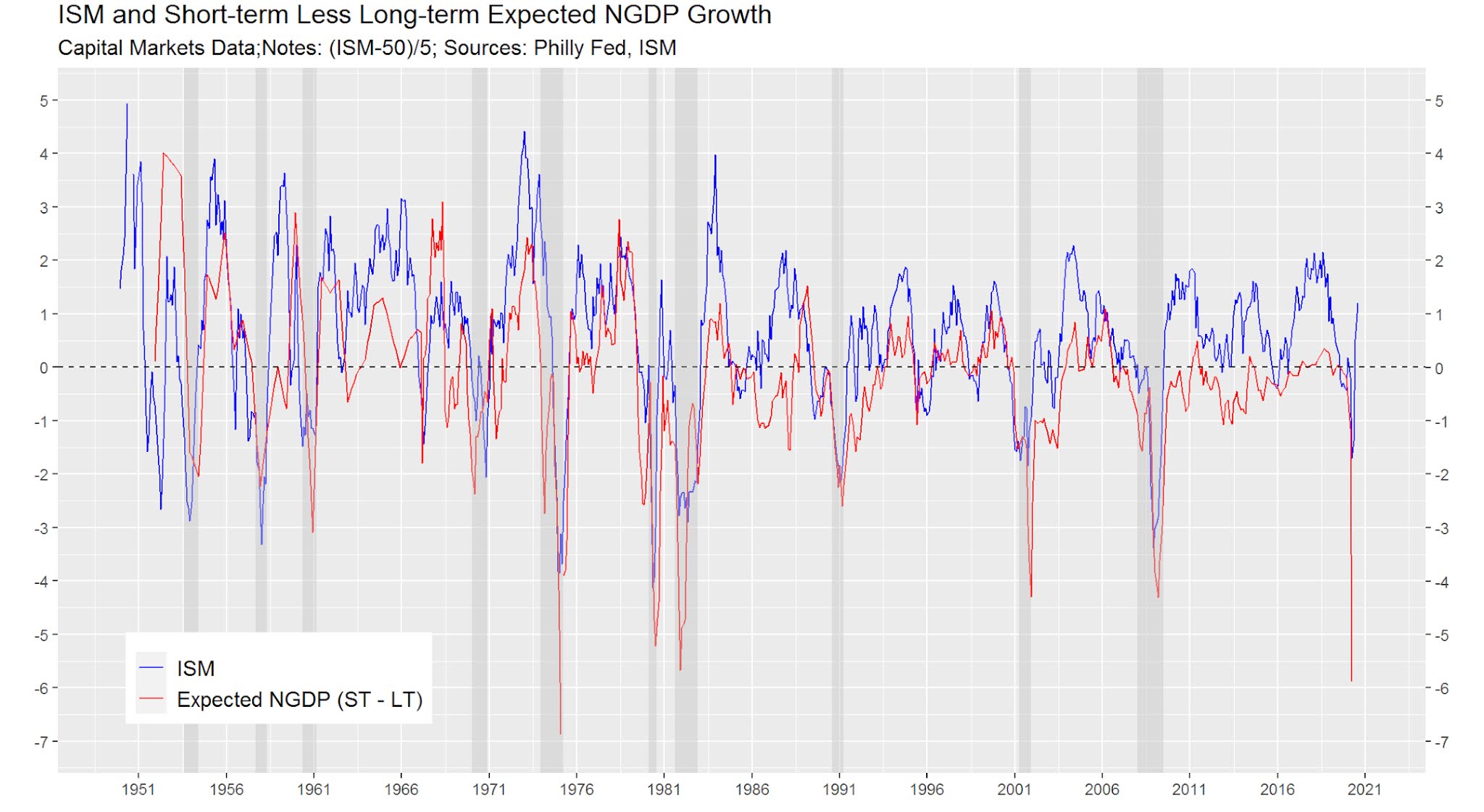 While the 10-yr risk premium has followed the decline in the ISM it has not yet rebounded with it. 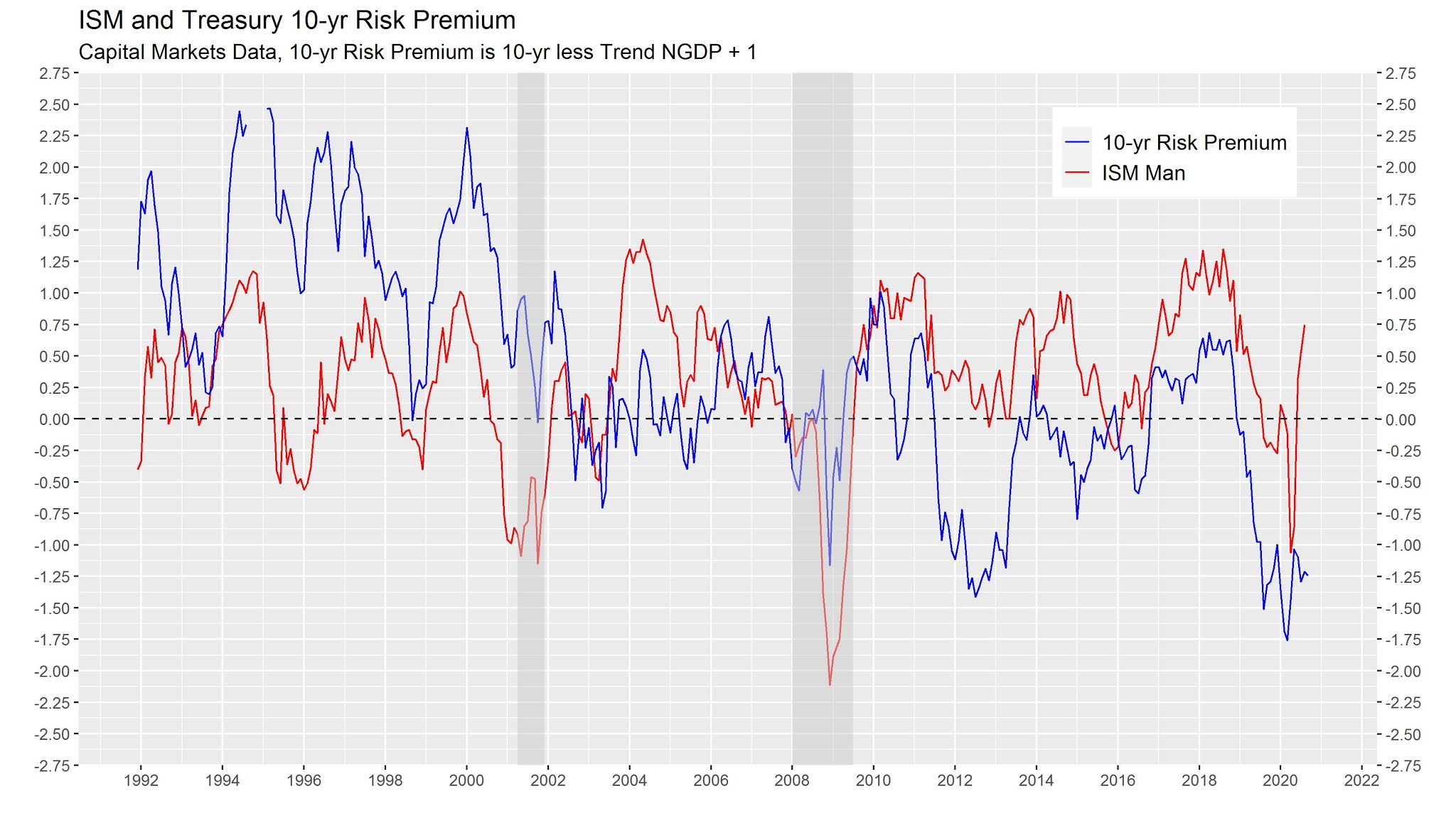 Furthermore, we could branch out and accept other research which is uncorrelated with the mean reversion expected returns literature like the bank net income gap.  This measure is currently predicting lower expected returns for the 3-yr to 5-yr segment of Treasury securities. 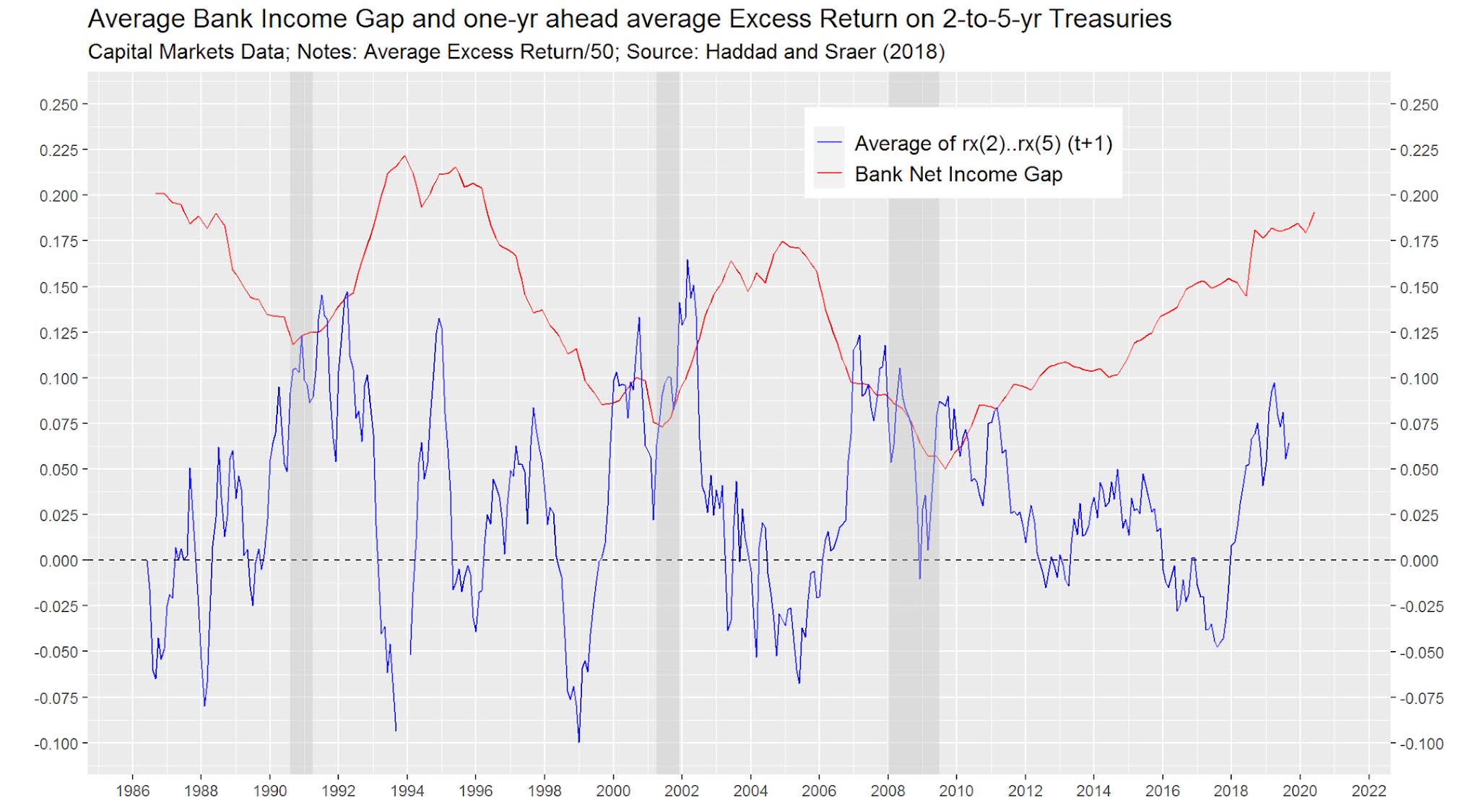 Further still, the massive decline in longer-term interest rates has brought with it a massive refi wave that could plausibly end in higher interest rate volatility. Mortgage Refi's still haven't broken with the 10-yr Treasury risk premium. Since there is no break here, we should conclude that the markets are still operating within some pre-established guidelines. 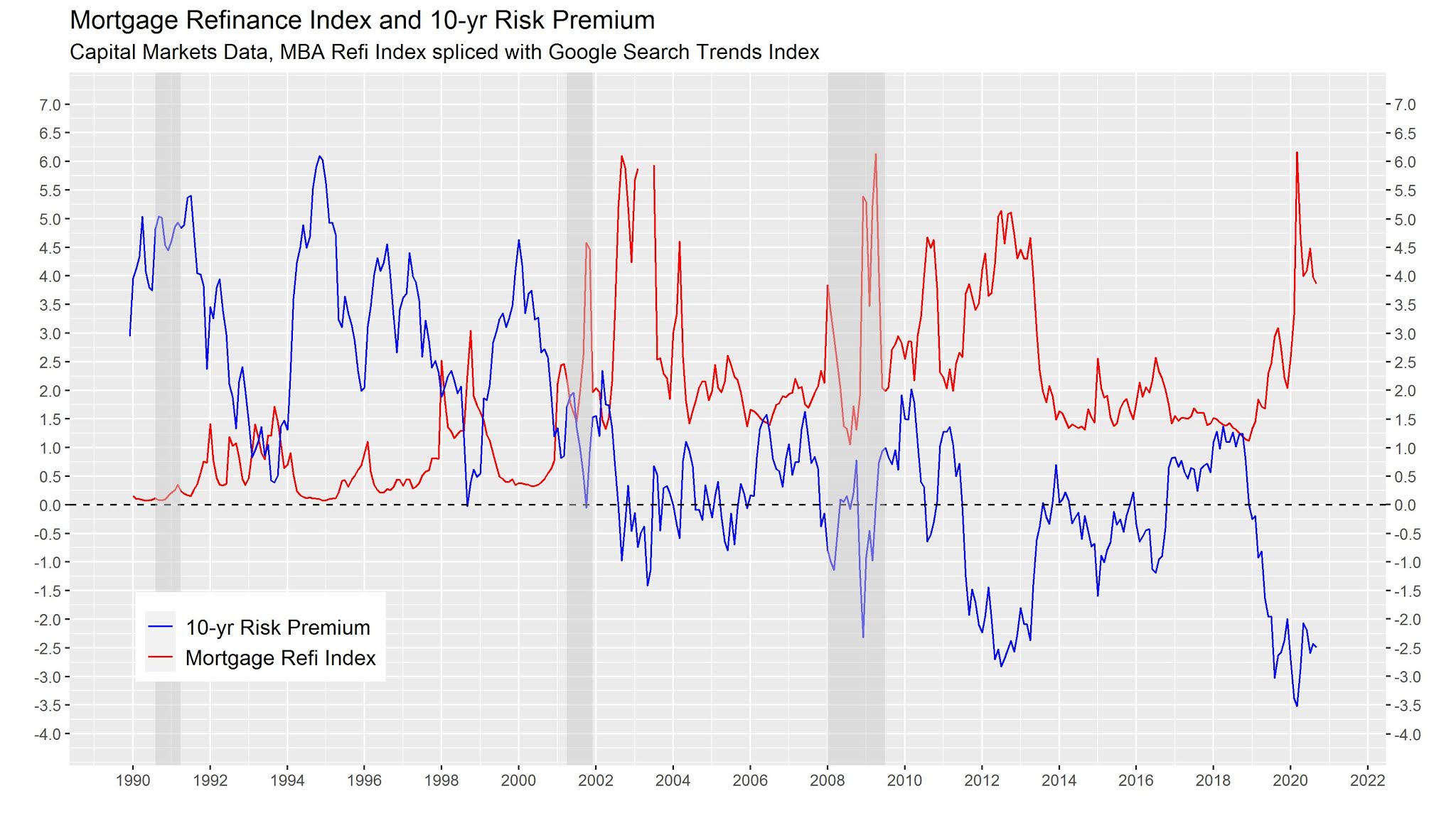 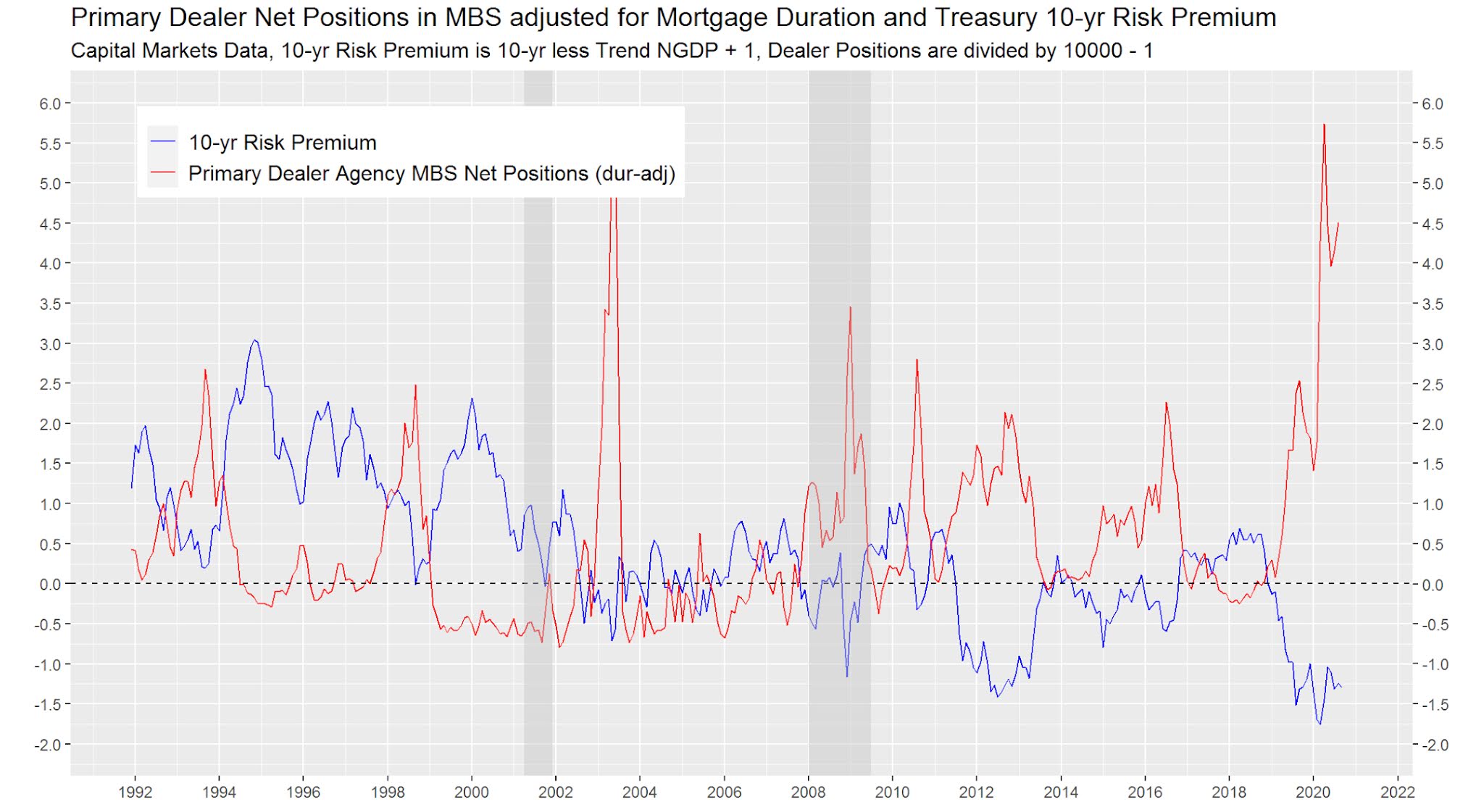 One might be considered negligent to not include the Federal Reserves role in all of this.  They have clearly been supressing term premium through their asset purchase programs, but that doesn't mean that they have removed all the potential volatility out of the market. 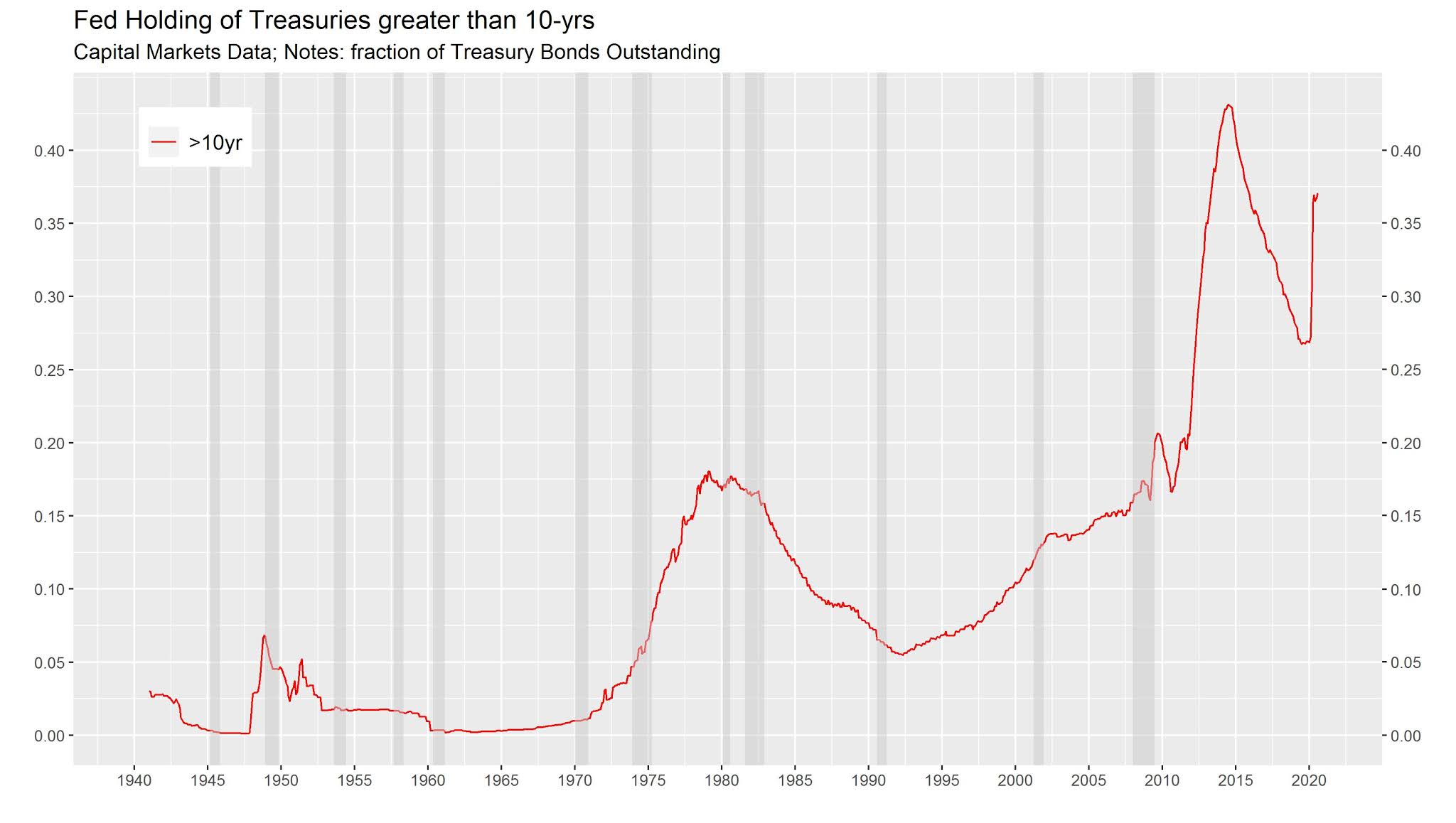