The Pandemic Destruction of the U.S. Economy

The policy response to COVID-19 has been extreme by most past standards. A simple look at the data tells us where we are concerning the past. What caused this response - I will not venture to explore - but at the root of it all must have been fear.  The fear of millions of U.S. lives lost. Even when past pandemics did not produce those results, nor even come close.  The table below highlights how many estimated deaths there were over the past five pandemics and sure enough, the recent episode is near the very bottom.

So what about the U.S. economy? The data are still trickling in, but what we have seen is ominous and dire. The policy response has been to forcefully destroy the labor market, production, and consumption.  The Federal Government's fiscal response has not nearly offset the destruction of the State and Local totalitarianism.  It has been an uncoordinated disaster.  Every mandated shutdown dollar decline in income should be matched by a stimulus dollar.  That would make sense. Instead, the John F. Kennedy Center for the Performing Arts received $25 million and laid off most of its staff.

What we need is an effective balance between health policy and economic policy.  One should think of losing a job as an "economic death" with negative health consequences such as suicide and depression.  Surely, it's not one for one. One economic death does not equate to one actual death.  But in the aggregate there is some ratio that must equate.

The following figure shows the number of initial claims for unemployment per new COVID death at a weekly frequency using data from the CDC and U.S. Employment and Training Administration. 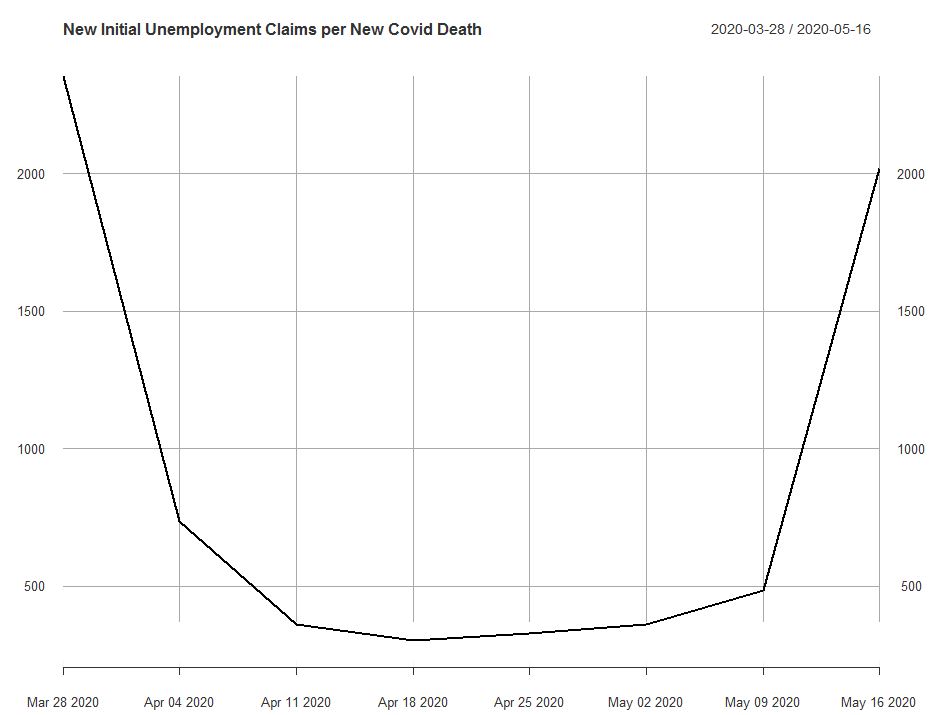 What has been the response of economic policymakers has effectively been to allow for the complete adoption of the recommendations of health officials.  This has been undoubtedly dangerous.  The medical community is not as well trained or adept at forecasting and it shows.  The policy has been to take these forecasts as absolute truth. Something all learned economic forecasters would deem as reckless and dangerous.  That is just one aspect of my argument. Policymakers should be learning from past forecasting errors and making adjustments.  Now for the second point: policymaking should incorporate the direct tradeoffs being made.  In this case its a global health outcome versus an economic one.  The two-run directly perpendicular to each other, as they almost always have, just ask the environmentalists.

The environmentalist agenda has always vied to unseat the ear of senior policymakers given without much thought to economic advisors.  Now in one fell swoop with ear has been handed over to the medical community, and with drastic results.