In the 34 months since November of 2016 the U.S. unemployment rate has declined -1.2% through August 2019. Across the counties that President Trump campaigned in, the average decline has been roughly -1% (through July 2019).

In Pennsylvania, county level unemployment rates have declined an average of -1.5%; in Texas the decline has been -1.9%; Alabama a whopping -3.1%; and in coal loving West Virginia -1.1%. 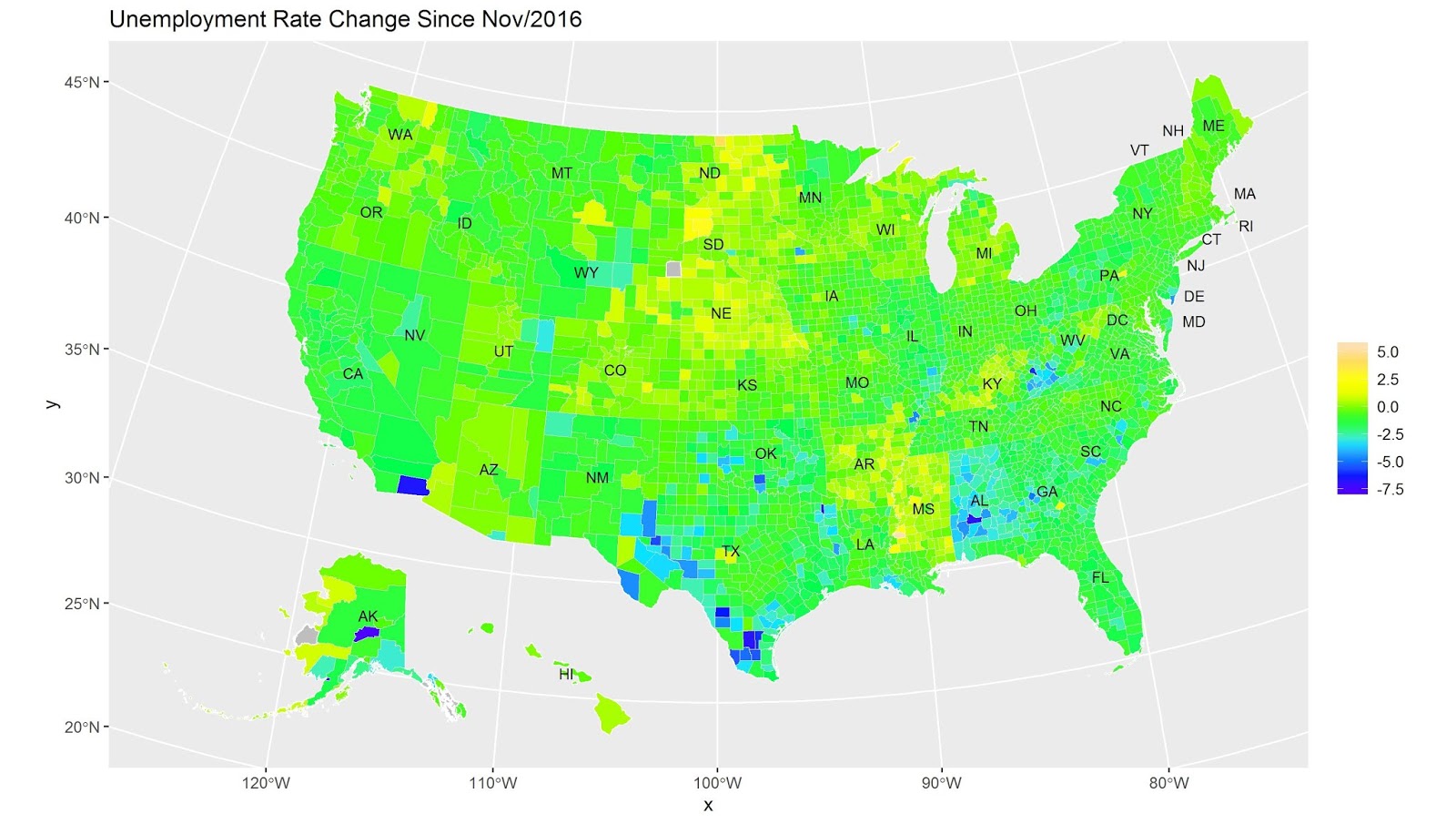 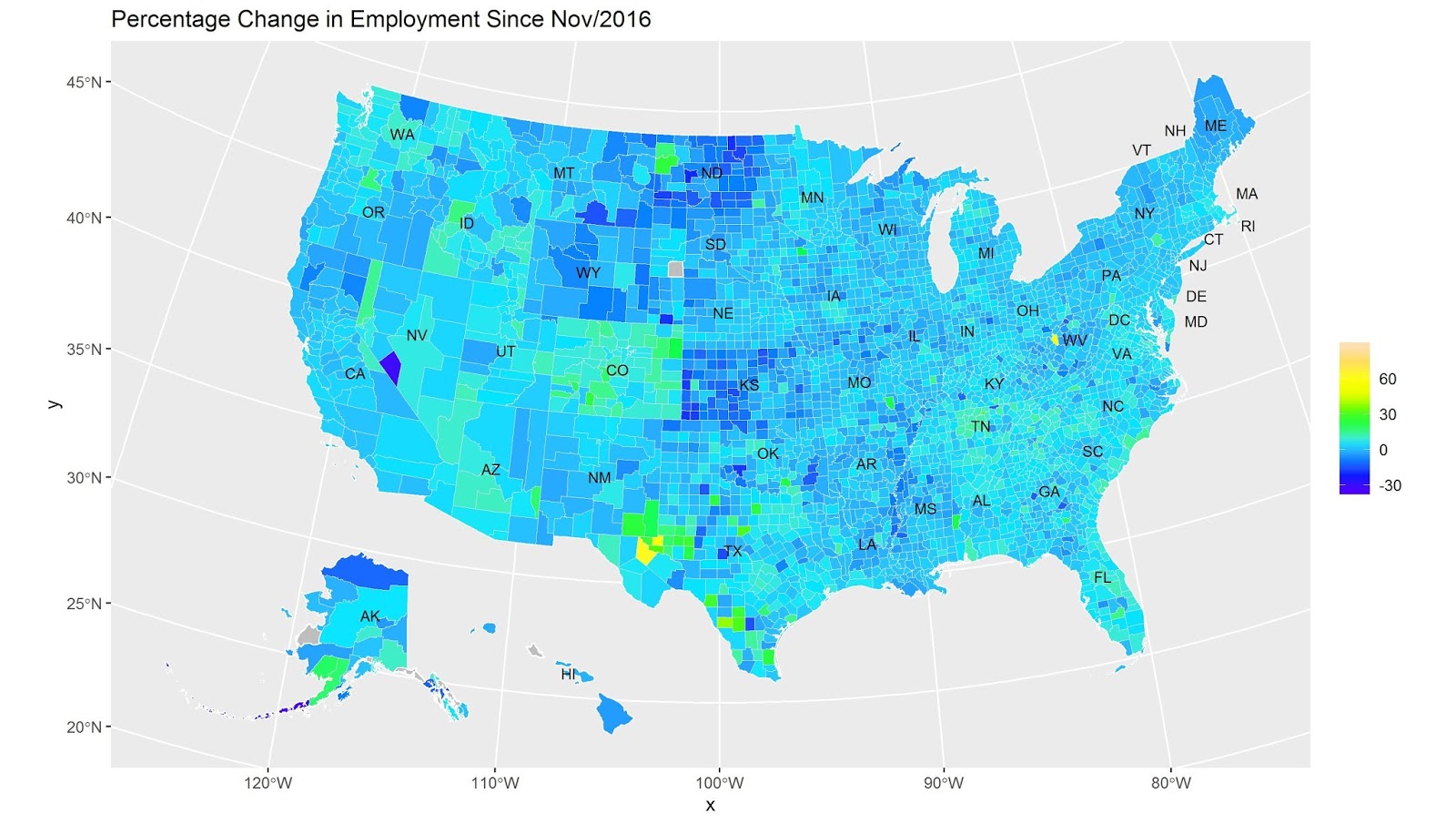 Major Trump policies fall under the mantra "America First". The goals of this approach entail - among other things - domestic energy independence, the adoption of "fair-trade" tariffs, and a reduction in the flow of illegal aliens. The policies effectiveness or lack thereof can be partially assessed by county level variation in labor market outcomes. President Trump has tended to focus most on the unemployment rate in his “Thank you Tour” and “2020 Campaign” rallies, so that is what I’ve chosen to focus on.
Effects of Energy Policy
Domestic field production of crude oil has increased 29% from November 2016 through July of 2019. Counties reliant on oil production have seen their unemployment rates decline an average of -1.5% versus an average decline of -1% for non-oil producing counties. Coal production has declined -16.5% since Trump took office. In-spite of this the average decline in unemployment rates for counties with coal mines has been -1.8% versus -1% for counties without coal mines. This suggests to me that while coal miners might leave Trump in 2020, their neighbors will stand by his side.

What about the Farmers?
Since Election Day, agricultural exports have fallen -5.2%. The decline in the unemployment rate for counties weighted by 2017 corn production has been a modest -0.6%, this is roughly half the decline of -1.25% experienced by non-corn producing counties. The same calculation for wheat heavy counties produced an even lower weighted decline of -0.47%. Farmers have clearly not meaningfully benefited from Trump era trade policy. 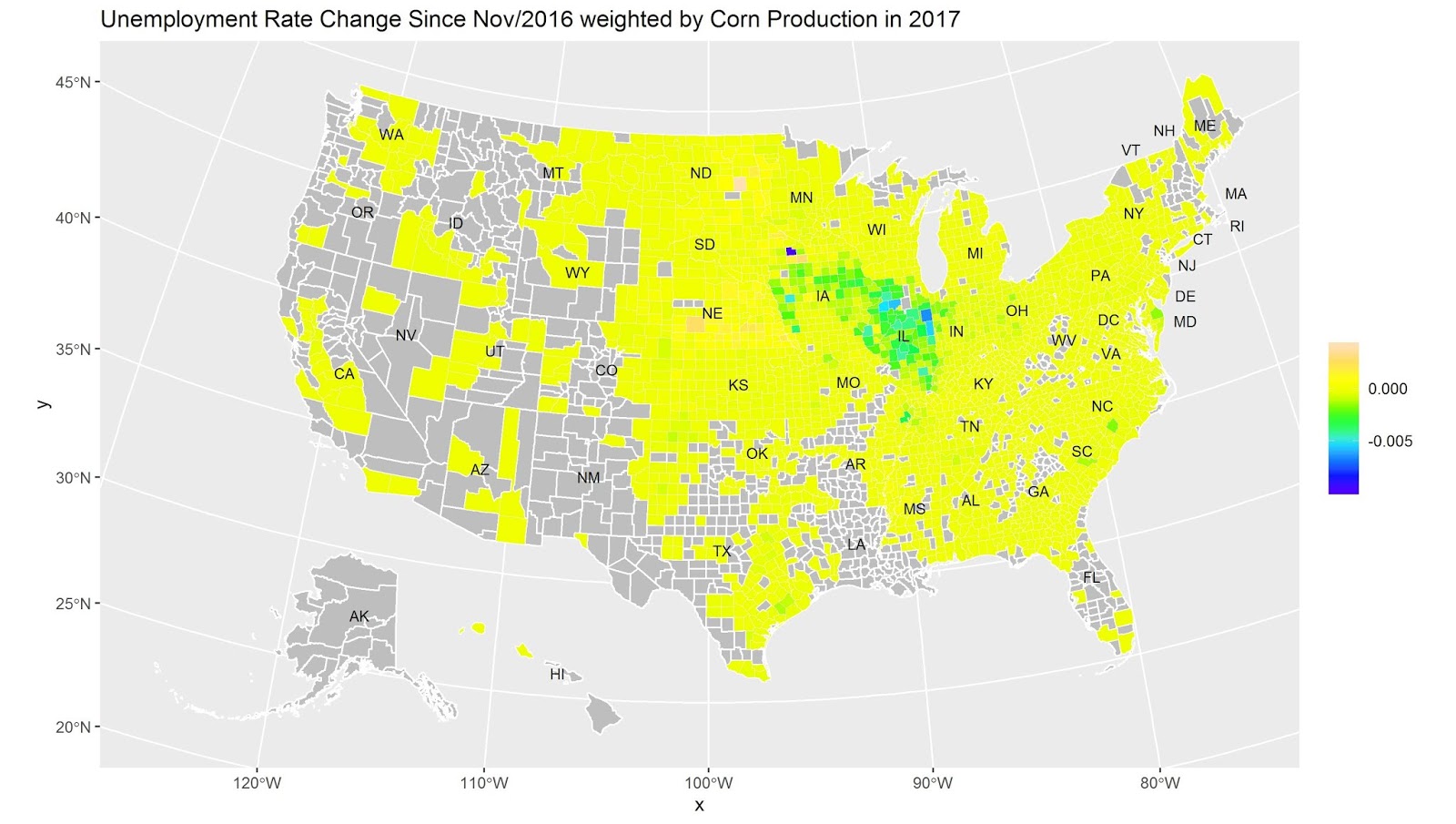 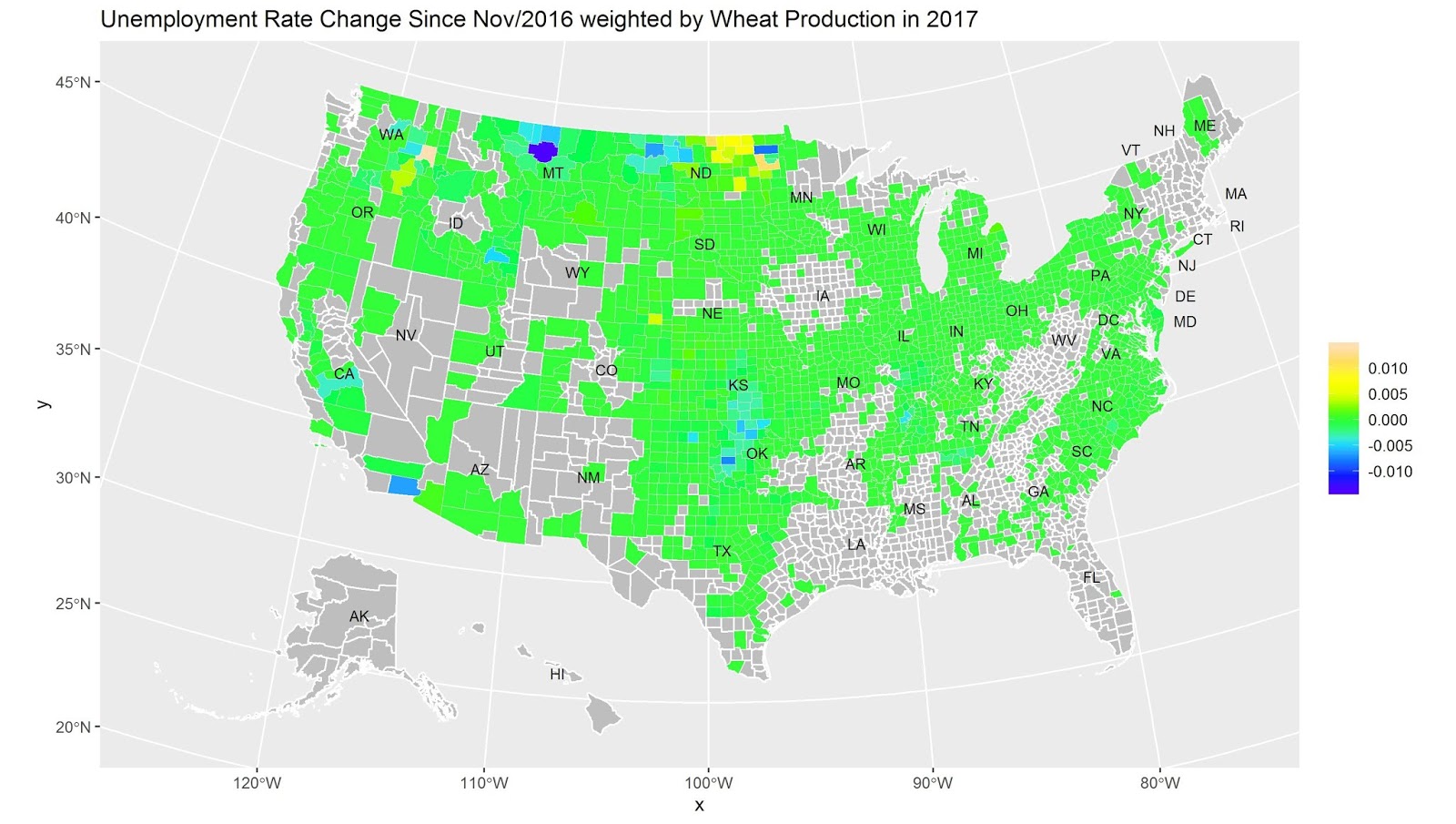 Intrastate Differences
Intrastate declines are even more telling, especially in Pennsylvania and the border regions of Texas. West Pennsylvania has seen the bulk of the improvement for the state as a whole. If this continues, I foresee Trump Pennsylvanians chanting, "Promises Made! Promises Kept!", into 2020. 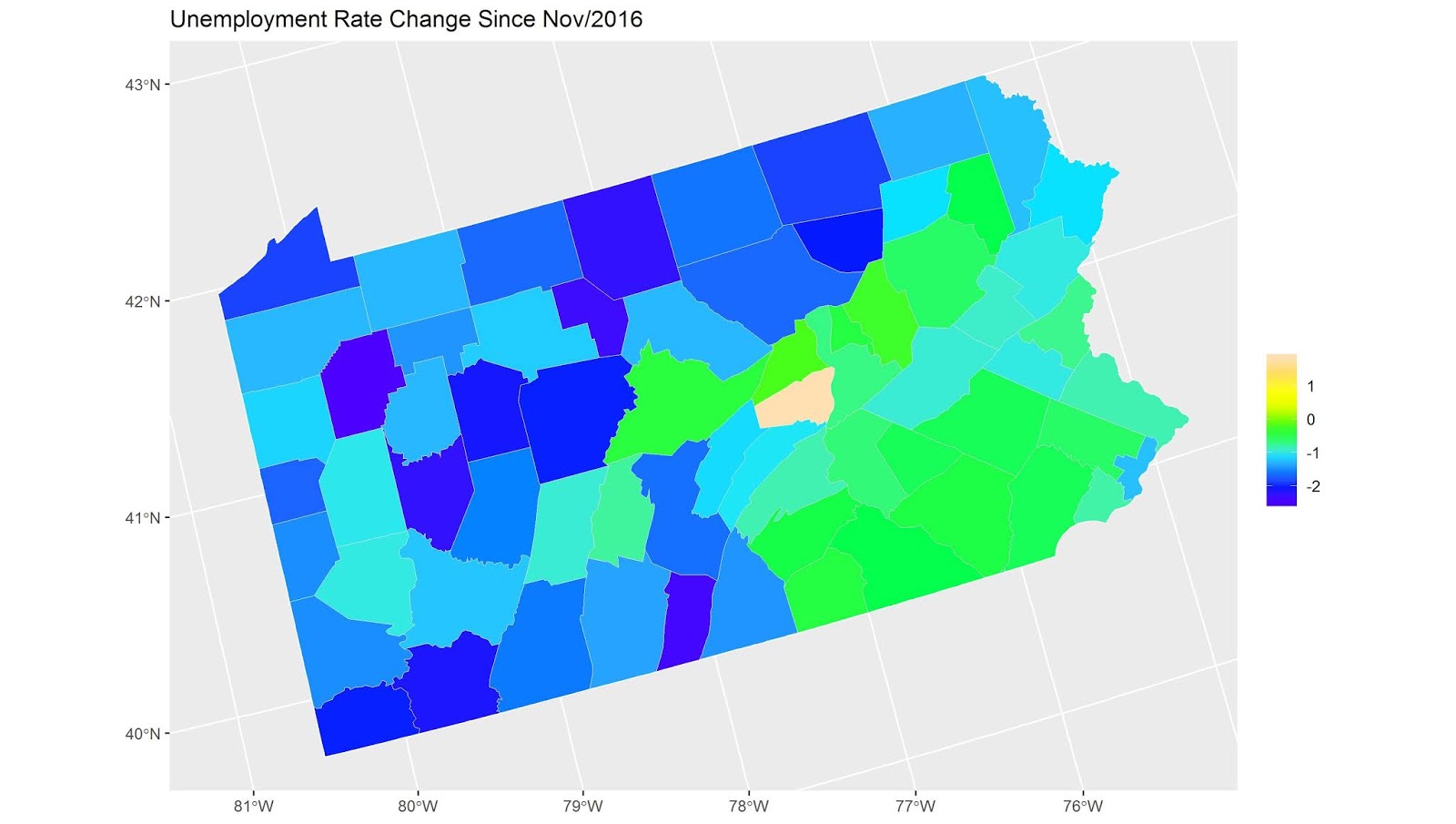 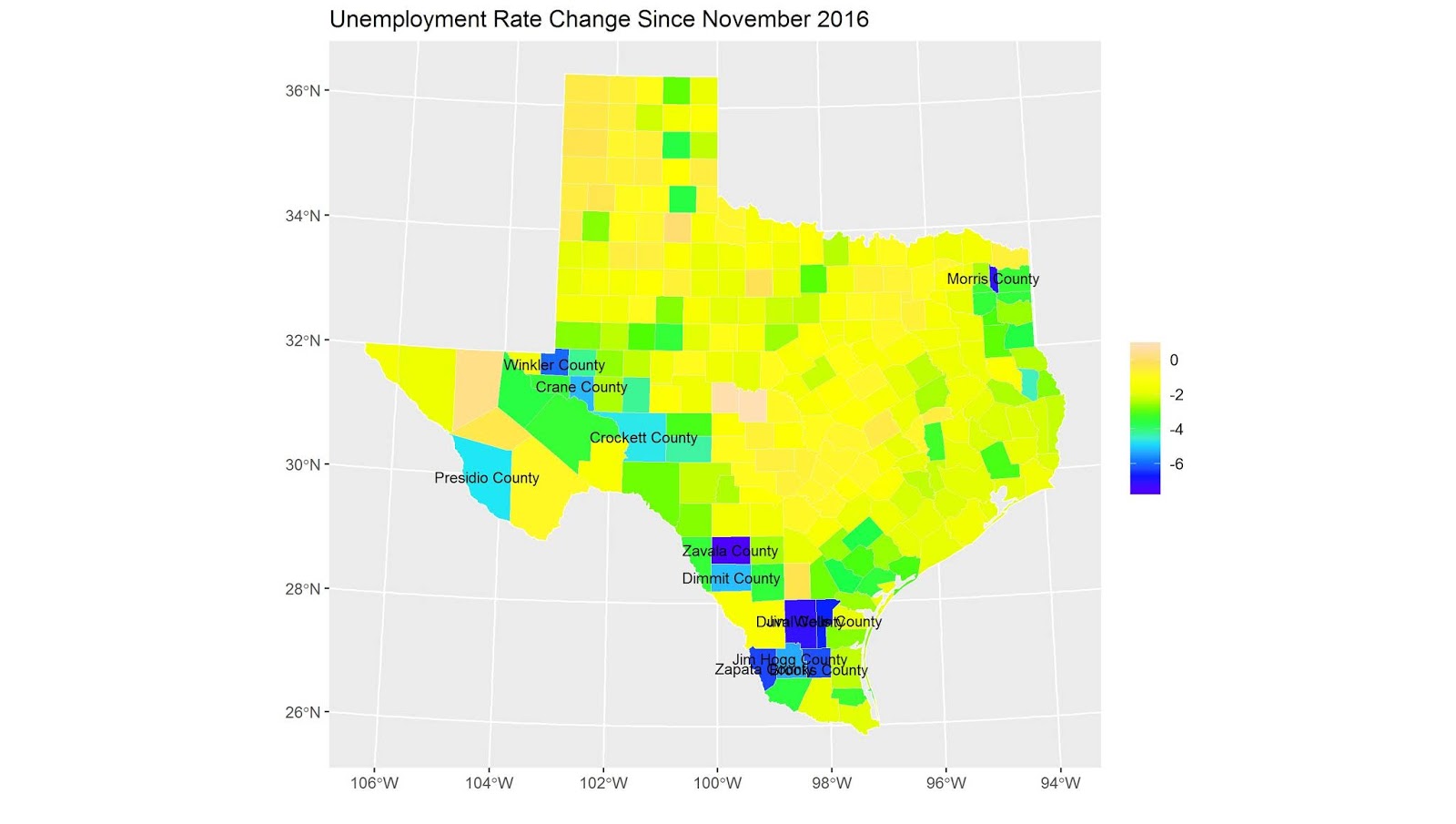 As usual, policies entail winners and losers.  While some policies like slashing regulations and approving pipelines have had real benefits for domestic crude oil production; the cut in regulations has not meaningfully limited the tremendous slide in coal production.  Furthermore, Trump’s Trade War has had a real effect on agricultural America, with unemployment rates declining much less in these regions than in the rest of the country.  Although promises have been kept, it has not come without gain for some and pain for others. The question is: Will some hard-line promises have to eventually be broken, in light of these circumstances?