The common problem among estimates of Bond Risk Premium...

are structural breaks.  In my experience intercept shifts are the number one reason estimates of term premium differ from realized excess government bond returns.  Most of the factors identified in the literature are highly persistent, this implies that all we are ever really doing is de-trending the level of yields.  The de-trending of the level of the yield curve leads to systematic over- and under- prediction caused by the long-term directional movement of interest rates.
Trend Nominal GDP growth is one such persistent detrender.  The following plot shows the realized 10Y excess return (blue dotted) against the ex-ante estimate (in green), here the ex-ante estimate is (9*(10Y-10Y ann NGDP)).  In the late 70's and early 80's the ex-ante estimate was much too high because the long-term rising trend in interest rates.  Since 2000, the ex-ante indicator has systematically under-predicted returns.  De-trending the ex-ante indicator further helps to significantly improve the ex-ante forecast (red line).  An easy fix to this problem is to use impulse indicator saturation (IIS).  IIS significantly improves the forecasting performance of every return predicting factor considered in the literature because it helps to quickly correct for the past forecasting errors caused by level shifts.  A future post will elaborate further. 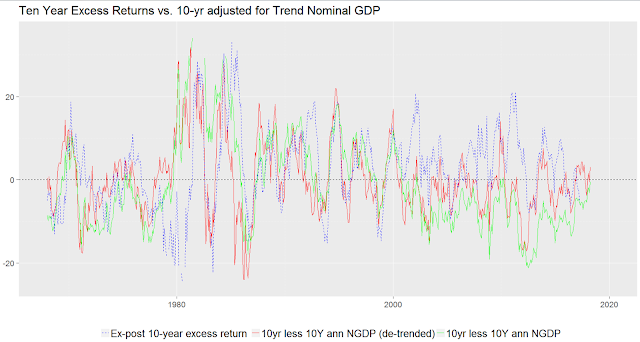